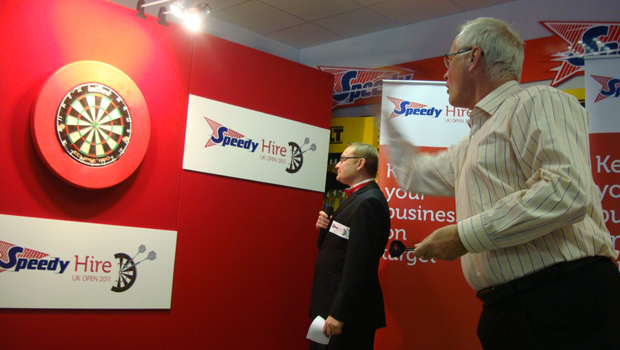 Kevin Painter’s former pairs partner and an ex-News of the World qualifier are amongst Speedy’s latest amateur players to make it through to the UK Open, it was revealed.

Michael Wiles, a winner of the London and Essex super league title in the same season in the late 1990s, progressed to the Reebok Stadium, along with Dave Solly, who once starred in the old News of the World tournament. Thomas Sandwell and Paul Amos were the third and fourth qualifiers from the second Speedy Services qualifier in Dartford, which was high on quality and entertainment.

From the initial 15 dart challenge, a score of 563 topped the charts, with Michael Wiles – who used to be Kevin Painter’s pairs partner - actually scraping into the one off games of 701 with a score of 376. Speedy, the UK’s largest equipment rental and services company, is staging further qualifiers in Inverness (11th), Leeds (12th), Stoke (13th) and Cardiff (19th).

A Speedy staff qualification opportunity will then take place in Haydock on May 4. Speedy again enlisted the help of 2008 world champion Mark Webster to offer expert advice and he was again impressed.“The atmosphere here in Dartford differed to Brighton, with a lot more noise and banter here, including one or two familiar faces.“Again, I am sure they will do themselves and Speedy Services proud come Thursday night, on June 7 in Bolton.” One player who will want to forget the Dartford qualifier was BDO star Steve Douglas, who could only muster a 15 dart score of 118 after hitting six points with his first six darts.

Speedy’s group marketing director Steve McIntyre said: “The standard of darts never ceases to amaze us, with the players again showing how strong the sport really is.“We are really hoping for one or two upsets at the UK Open, and there’s certainly no reason why they can’t come from Dartford.”