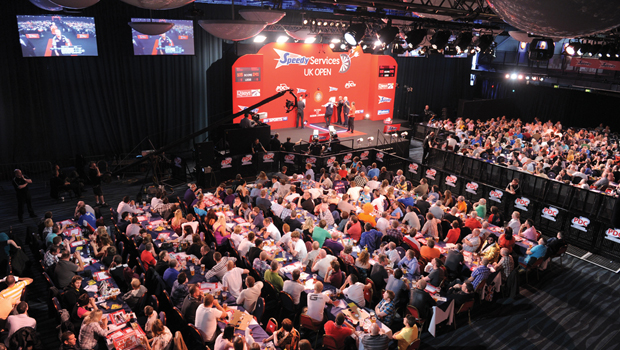 FORMER Speedy Services UK Open champions Phil Taylor, James Wade and Roland Scholten will be in action on the opening night of this year's tournament on Thursday June 6.

The trio will be amongst 114 players competing in the preliminary, first and second rounds of 'The FA Cup of Darts' next month, as the four-day event begins in the Premier Suite at De Vere Whites in Bolton.

Wade will kick off the tournament on the main stage when he faces Speedy Qualifier Robbie Green in the preliminary round of the event, having finished outside of the top 64 professionals following eight qualifying events.

The two-time UK Open champion will have to win three matches on the night if he is to win through to Friday's third round alongside the top 32 professionals, with Birmingham youngster Matt Gallett awaiting Wade or Green in round one and the potential for a clash with Wolverhampton's Wayne Jones in the second round.

Holland's Vincent van der Voort, the 2007 UK Open runner-up, will follow Wade onto the main stage in the preliminary round when he meets Scottish qualifier Andy Murray, before 2004 UK Open champion Scholten takes on another amateur, Conan Whitehead, in round one.

The second round's games on the main stage will kick off when former World Champion Richie Burnett takes on Derby-based debutant Ricky Sudale.

Phil Taylor, the four-time UK Open champion and last year's beaten finalists, then enters the fray against experienced Coventry professional Kevin Dowling - with the World Champion having finished only 44th in the eight qualifying events.

The opening night features action across eight stages simultaneously as professionals and amateurs compete for the right to join the top 32 qualifiers - headed by reigning champion Robert Thornton and Dutch star Michael van Gerwen, who won five of the eight Qualifiers - in Friday's third round.

World number ten Justin Pipe is amongst the stars in action on stage two as he opens his challenge against Gareth Pass, while Speedy Qualifiers Paul Whitworth and Andy Boulton also meet on the same oche.

2005 UK Open finalist Mark Walsh will open his challenge on stage six in the second round against Liverpool's Lee Palfreyman - whose brother Joey will also be in action on the opening night as he faces either Shaun Griffiths, Keegan Brown or Ireland's Keith Rooney.

The 32 second round winners from Thursday June 6 will progress to the third round on Friday in Bolton, when the leading professional qualifiers enter the fray.

The draw for the third round will be made following the end of the second round action on the Thursday night, with the tournament featuring the unique open draw between each round which can pit top stars together.

Tickets for the Speedy Services UK Open are still available by calling 0844 871 8807 or by visiting www.seetickets.com/go/ukopen.