Speedy to catch it all on camera! 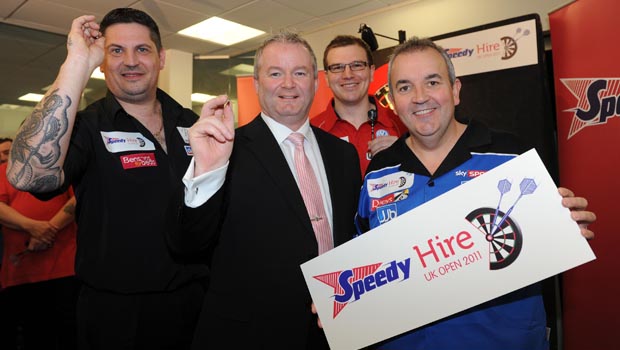 It will be a case of Speedy by name, Speedy by nature at the UK Open in Bolton, as the official sponsors leave an immediate impression on thousands of darts fans.

To celebrate Speedy’s inaugural sponsorship of the ‘FA Cup of Darts’, the UK’s premier providers of rental equipment and support services will be picking up the camcorder for some exclusive behind-the-scenes footage for supporters to savour from Thursday through to Sunday.

For the first time, fans will get backstage access at the Reebok Stadium, courtesy of a YouTube channel which will feature a series of short, snappy interviews and features with the stars of the oche – not to mention some of the 32 Speedy qualifiers.

The digital development is an attempt to engage with as many fans as possible by giving them some snippets to savour from their favourite players. Speedy will also be targeting the WAGS with some quirky chats to camera, which will incorporate a handful of Speedy questions, known as the ‘Speedy Six.’ Speedy’s group marketing director Steve McIntyre said: “The pieces are designed to be a bit of fun, which will engage with supporters away from the oche.”

Speedy's group marketing director is aiming for a great weekend in Bolton! The pieces will be available to view through Speedy’s twitter page, www.twitter.com/speedysports, its Speedy Hire Darts facebook page and its official darts blog, http://sports.speedyservices.com.

Speedy is also finalising its plans within the Reebok Stadium from Thursday to Sunday, which will feature big red Speedy foam hands for supporters to wave, along with specially branded 180 banners. Steve concluded: “The Speedy Hire UK Open can’t come around quickly enough now, and we hope that everyone at the Reebok – and at home – will be able to make the most of our efforts to engage with them.“We will also be tweeting and updating Facebook for the duration of the competition, so if people aren’t following us now, then we hope they will be once the action commences.”