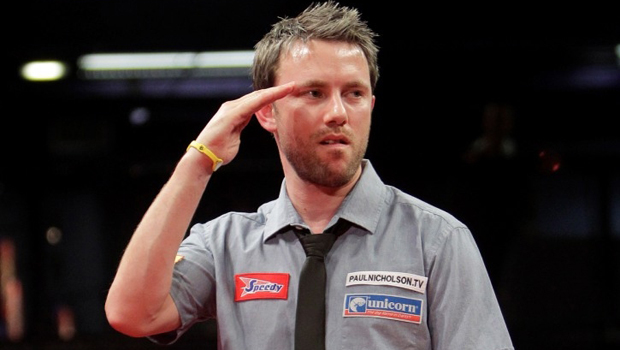 He might not have won the Speedy Hire UK Open outright, but Paul Nicholson can celebrate the next best thing after winning the company’s prestigious Champagne Moment award.

One bottle of champagne over here please Speedy! Picture courtesy of Lawrence Lustig/PDC‘The Asset’s’ stunning performance to beat Phil Taylor 9-8 in the fifth round of the competition was chosen as the most sparkling moment of the entire four days last month.

Around 500 darts fans voted for their most memorable performance of the tournament after sponsors Speedy decided to create a poll for them to find an official champagne moment winner. Nicholson’s win over Phil Taylor received 38 per cent of votes with James Wade’s semi-final comeback against Mark Webster second (15 per cent) and Nicholson himself third for another outstanding result against current Premier League champion Gary Anderson (11 per cent). Darts fanatic Mandy Stevenson voted for Paul to win the Champagne Moment and was picked at random to win tickets to the World Matchplay in Blackpool, courtesy of the PDC.

She will also present Paul with his bottle of champagne in person on Wednesday July 20 at the Winter Gardens. Paul said: “It was obviously a special moment to win against Phil Taylor and it’s great that so many fans enjoyed it so much too.“Obviously I’d have loved to have gone on to win the Speedy Hire UK Open but winning a vote like this is a big honour and I’ll be delighted to accept the champagne in Blackpool.” Mandy said: “I am a huge darts fan so to win this competition is a dream come true.“Paul definitely deserved the award. He threw some phenomenal darts and to beat Anderson and Taylor in the same competition is worth some serious recognition.“Thanks to Speedy this is the case and I can’t wait to say well done to Paul in person!” Speedy’s group marketing director Steve McIntyre said: “There were so many memorable performance across the four days that we wanted to create an award to commemorate them.“Paul Nicholson’s name was on the tips of our tongues, so it came as no surprise when we learnt that he had won.“He is a worthy winner and he gave us some memories that we will certainly treasure for a long time to come.”