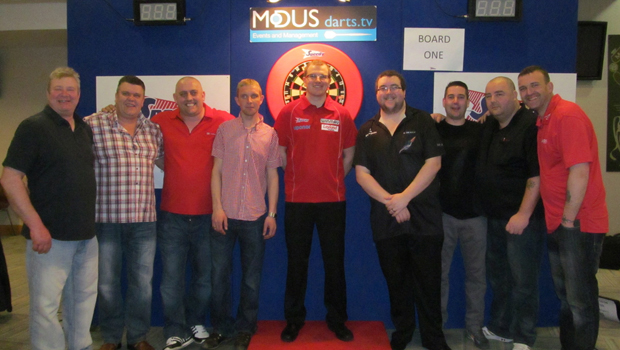 The lucky eight triumphed over hundreds of other hopefuls at Old Trafford during the second of Speedy’s four qualifying events for the prestigious UK Open in Bolton in June.

St Helens’ Stephen Bunting (28) topped the 15 dart chart with a whopping score of 660, paving the way for eventual qualification after winning two-nil in his 501 knock out.

At Old Trafford, Speedy enlisted the help of 2008 BDO World Champion Mark Webster, who was on hand to offer expert advice and he was extremely impressed with the quality on show.

The Manchester qualifier follows an event at Hampden Park in Scotland and will be followed by two further qualifiers at Wolverhampton Civic Hall (22nd April) and Alexandra Palace (24th April), all organised by Speedy, the UK’s leading provider of equipment rental and support services.

Speedy’s communications manager, Sian English, said: “The talent on display at Old Trafford blew us away. Stephen’s score of 660 with 15 darts has set the bar very high and will it will be a tough challenge to beat this at our next two dates.