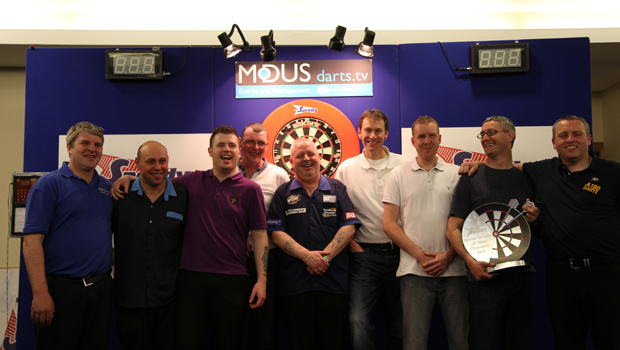 The dreams of eight amateur darts fanatics have well and truly taken flight with Speedy Services after becoming the first players to qualify for one of the sport’s biggest tournaments.

The brave Scots triumphed over hundreds of other hopefuls at Hampden Park in Glasgow during the first of Speedy’s four qualifying events for the prestigious UK Open in June.

Their first obstacle was to score enough points with 15 darts to qualify to play in a ‘best of three’ 501 challenge against another high scoring amateur.

Edinburgh’s Gus Santana topped the 15 dart chart with a huge score of 580, paving the way for eventual qualification after winning two-nil in his 501 knockout games.

Andy Boulton, Scott Robertson, Andy Murray, Gary Stone, Jamie Hagen, Tam Dymond and Andrew Mcnicol also qualified with Gus and can now look forward to an appearance at the FA Cup of Darts at the Reebok Stadium on June 6.

Speedy enlisted the help of the reigning UK Open champion, Scotland’s very own Robert Thornton who was on hand to offer expert advice and he was extremely impressed with the quality on show.
Speedy’s communications manager, Sian English, said: “Our visit to Hampden Park was the first stop on our four date tour of the UK, and we have already been blown away by the quality on display.

“You could see what it meant to the players and it was great to see the winners’ expressions when they hit the winning double to bag their place at Bolton.”