Speedy to the rescue for stricken caravan man 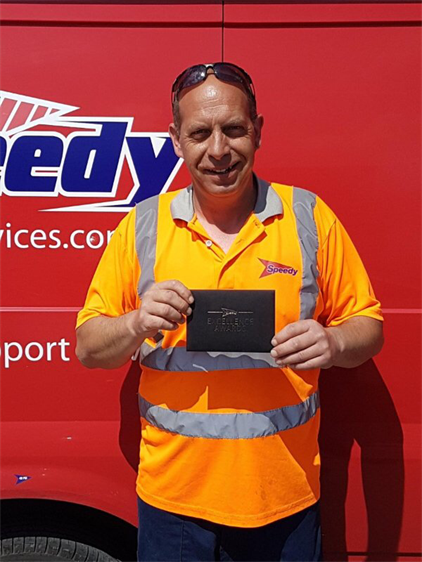 Our engineers are often out on the road and see many peculiar and sometimes serious incidents, on this occasion our colleague Rob Hall was on hand to help a stricken caravan owner when his caravan had detached from his car on the A33 near Basingstoke.

Rob recounts the story: "While on route to attend a breakdown I noticed a caravan had become un-hitched from it’s vehicle and was in a dangerous position on the wrong side of the carriage way."

"On my return journey back to the depot, the caravan was still in the same position, but at this time I was on the same side of the carriage way so I was able to pull over and stop in front of the caravan with my Speedy vehicle and beacons flashing. Within 5 minutes of me trying to assist a police officer arrived at the scene and closed off the carriageway, so I could continue to work on the issue with the caravan. "

"After approximately an hour I had solved the problem ( the emergency brake system had jammed against the wheel) and the gentleman was back on his way.

The gentleman was very happy that I had been able to help, so much so that he sent in a letter of thanks to my manager, on which I received an excellence award."

An extract of the letter from Mr Vellacott stated: "I am enormously grateful to Mr Hall, firstly for stopping and then for being so helpful. He is a natural engineer and showed considerable skill and determination to crack this problem"

Rob's actions helped prevent any serious incident from occurring and his desire to help fix the man's broken caravan showed great spirit and determination to go above the call of duty.

This does typify the #speedydoesit attitude.